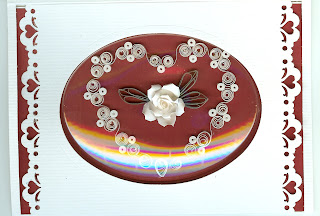 These domed cards are my new favorites. They are actually a tri-fold card so all of the mechanics of placing a back ground, quilling, and the dome are well concealed. They also travel through the mail really well with no extra packaging at the first class rate of US $.46. I decided to use a two inch border punch on the top and bottom of the face of the card to dress it up a little. I backed the punched area with a ½” wide strip of quilling paper. I cut a colored piece of accessory paper slightly larger than the outside dimensions of the dome and marked the center of the paper to center my design. I didn’t fasten the dome to the card right away so I could occasionally lay it over the design as I worked. (I wasn’t sure how close to the edge of the dome I could get or how “deep” the quilling could be.) I was pleasantly surprised that my roses, which I make using 3/8” strips fit under the dome beautifully. Once I worked out my design, I taped the dome inside the opening and then centered my design inside the dome and taped it in place. Then I used a double-sided tape to close the third panel over my efforts. I did find it a little tricky figuring out where the design should be placed so it was right side up when the card opened. I also noticed that the two end panels are very slightly different in size as one is meant to cover your work and the other is meant for the greeting. These come three to a package (with envelopes) for $5.50; the item number is ECSK417021 if you would like to try them. I would love to hear what you think of them. 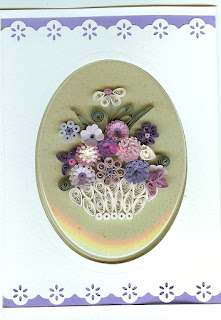 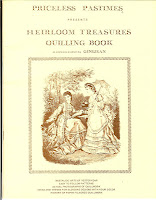 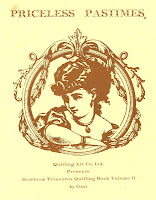 Over the last 35+ years, it has been my privilege to meet and get to know some of the quillers who were responsible for the resurgence of quilling here in the United States in the 1970’s. I’ve had the pleasure of meeting Betty Christy (author of Quilling Paper Art for Everyone published in 1974), Marlene Bartels (owner of Quill It), and I still stay in touch with Malinda Johnston (founder of Lake City Crafts). Recently, I have been visiting (over the phone) with Gini Antoine. Now in her 80”s, Gini “discovered” quilling in the 1960’s. At the time she was giving painting lessons and very active in the world of arts and crafts traveling around the country teaching and demonstrating at the national hobby industry shows.

She visited a friend who showed her a piece of antique quilling. She was fascinated and like so many of us, she got hooked. She formed a company which she called Priceless Pastimes and starting selling kits and strips and adding color to her work. She published two books Heirloom Treasures Quilling Book I which includes patterns for a wreath, Christmas tree, a Spanish fan, "crystal" snowflake, cross and a peacock among others. Heirloom Treasures Quilling Book II includes designs for wheat, mushrooms, an Owl, snowflakes, cross and some very pretty borders.

She was the quiller who Betty Christy to quill and is credited with naming the different shapes. In her book Quilling Paper Art for Everyone Betty Christy said “More than ten years ago, Gini Antoine of Independence, Missouri, pioneered a delicate lacy form of paper filigree. She began the custom of naming the various coils when she first researched and introduced what she called a “lost art.”

I have had several delightful conversations with Gini and learned that she still had some of the books she had written. These are vintage books published in 1970 and 1972. My two favorite designs are a lacy Victorian Christmas tree, and a rather intricate Valentine border design. There are also several pretty snowflake designs. For those of you who are collectors of “all things quilling” I have put them up on the web site.