In my August 7th post (Evangeline Enns & Quilling with the blind), I told you that Evangeline Enns was going to be working with some visually impaired people who wanted to learn to quill. We got a lot of feedback from that post, and I thought I would take a few minutes to update you on how it was going. I spoke with Evangeline yesterday. She has had two classes already and was busy preparing for her next class. She made shape charts for her “students” by gluing the actual quilled shapes to the chart (instead of printed shapes). This would give the new quillers a point of reference, they could feel the shape she was teaching them, and then make one of their own. She has her group finger rolling and said they seem to be pretty comfortable with that. They are working with ¼” wide strips and they are measuring and cutting them on their own. At their first session, (I forgot to ask how long each class is), she had them making teardrop shapes for flower petals, and they learned how to shape short strips to use as stems. At the next meeting she had them make marquises so they could add leaves to their flowers. She says they are an enthusiastic group and some of them want to make snowflakes! We talked about how they could do that with no visual pattern . . . but decided that if it were a simple snowflake to start, they would be able to feel the different shapes used . . . but the placement? I know many sighted quillers do use a pattern to get their snowflakes nice and even and suggested copying the patterns and then using a ball point pen or an embossing tool to go over the lines of the pattern. That would make a raised pattern on the back side of the paper. Most quillers that I know, who do use patterns, put a sheet of waxed paper or Mylar over the pattern and then lay their pieces on the pattern. I would think that using a piece of plastic food wrap instead of the waxed paper would allow them to “feel” the pattern through the plastic wrap. Once again I am asking for any suggestions or feedback from you, the readers, this is definitely a “learn as you go” project, but a very exciting one.

I also spoke with a quilling friend of mine who is legally blind, and who had put her quilling away when she lost her sight. When I told her about Evangeline’s classes, she decided to give it a try, once again. I will let you know how she makes out. We talked about the necessity for good organization for the blind . . . for those of us who are blessed with sight; we can have a messy workspace and just pick out the appropriate color strip from the pile on our tabletop. Perhaps organizing strips by color could be done by using the label makers available in office supply stores to label the front of plastic drawers or the top of the bags the strips come in. Once again, I am open for any suggestions.
Posted by Unknown at 8:26 AM 3 comments:

Just in case you haven’t noticed . . . I love quilling. I am fascinated by “all things quilled”. I was so impressed with the “simple” designs quillers created for the Accord Calendar project a couple of years ago. Simple is in quotes because the projects were anything but. It took a great deal of creativity to create designs that used no more than 108” of quilling paper. I was blown away when I saw my first reliquary the year we had our quilling conference in Rochester, NY. My personal goals included creating my own quilling and helping to promote this little known art form. That’s why I worked towards organizing American quillers so many years ago helped in organizing what today has become the North American Quilling Guild. Of course, now I have Whimsiquills, the business that has taken over my home and a large portion of my life. I am still selling my work and of course selling supplies as well, but I find I don’t have much time left over. I don’t get to teach or demonstrate much anymore (unless we have a visiting quiller here at the studio). So how do I keep promoting the art? 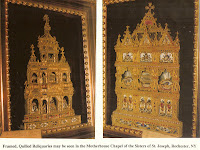 We have come up with a program that I think is pretty unique, a lending program. When I talk to a scout leader or teacher who is planning to teach a group to quill . . . I tell them about our tool lending program. Most of these groups have a very limited budget (if any at all), so we send them the tools they need for their class at no charge, along with some other goodies (sometimes bookmarks or mat boards, whatever we have on hand). We also make sure they have links to our free patterns and instructional sheets which include things like a basic shapes chart and are all free and downloadable. We also encourage them to visit our blog http://www.quillingwithwhimsiquills.blogspot.com/ where we have all kinds of helpful info like teaching quilling. We have had an excellent response to this program.
Posted by Unknown at 8:27 AM 4 comments:

Meeting Fellow Quillers in the Stranger Sitting Next To You

What are the odds of two strangers sitting next to each other on a bus and finding out that they are both quillers? Well I am no mathematician, but considering how few quillers there are in the world, I would assume the odds of that happening were very small. It happened in July. I had to spend some time with my mother and her husband who was recovering from multiple strokes. They live in The Villages, FL, which is an awesome retirement community (if you like Florida, which I do not, especially in July . . . UGH) When it was time for me to head back to Connecticut, I took a shuttle bus from the Villages to the Orlando airport. I was sitting on the bus reading, waiting to leave when a woman came over and asked if she could sit next to me. We got to chatting and I told her that I was going back home and needed to get back to work. She asked me what I did . . . (don’t you just hate that question, cause then you have to explain what quilling is to someone who never heard of it. Oh I just roll little bits of paper up and then pinch them into etc., etc., etc.-you know, you’ve all been there) Well, imagine how shocked I was when I told her I was a quiller and she responded that she was too! We spent a delightful hour and a half on the shuttle talking about quilling, how she got started quilling and how I got started. We talked about selling our work, and making quilled cards, who her teacher was, finding other quillers, the North American Quilling Guild and so on. You know the kinds of conversations quillers always have when they find each other. We exchanged email addresses and when I handed her my business card, she got so excited because she was visiting with Whimsiquills! So then the conversation shifted to my web site, and the blog and the different things I’ve done since starting Whimsiquills. When we got to the airport, we continued to “hang out” while we waited for our flights. She was heading to Long island, NY, so I let her know that the 2010 NAQGCON was going to be held there; she had missed the Tampa NAQGCON due to illness. One of the many things we talked about was a quilled doll she had made. I asked her to send me a picture because it sounded like a novel idea and I would like to post a picture on my blog. She said she used needlework canvas for the dress and placed the quilling on that. We’ve stayed in touch through emails and Facebook, and every time we “speak” we laugh about how we found each other. I guess it was just serendipity. 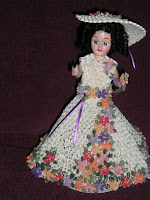 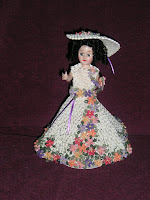 BTW I do have a page on Facebook and I have started a quillers group as well.
Posted by Unknown at 8:47 AM 1 comment: