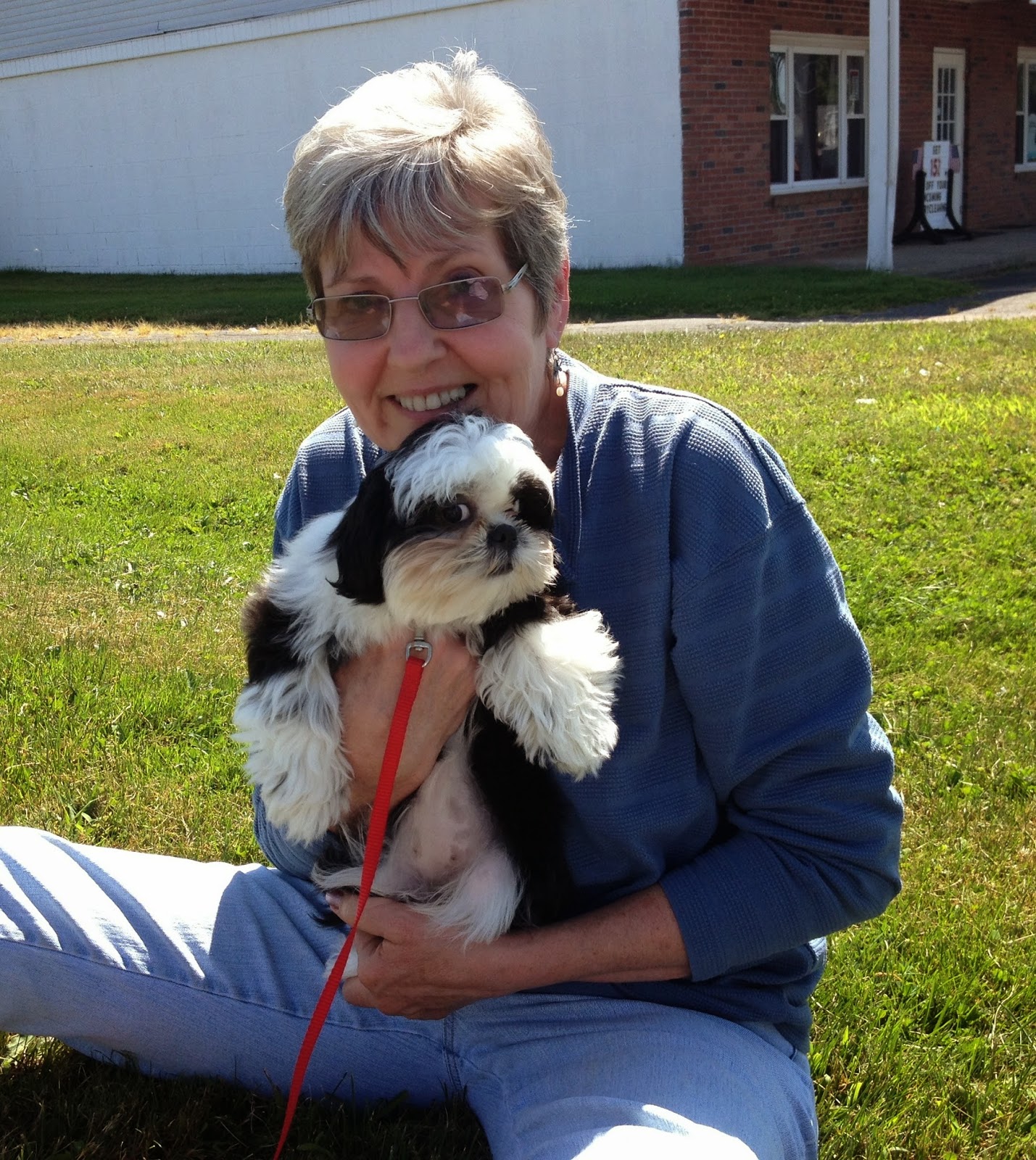 Many of you who know me through the web site Whimsiquills.com or this blog have probably learned that I have had to move/change my web site. This wasn't something I ever planned to do but the decision was made for me when I learned that the platform that was hosting the site was closing down. WOW! That was a shocker! So after many, many hours of work and no small amount of frustration I finally have the new web site up and running. I tried to make it look like the old site so people wouldn't get "lost" and I actually like some features of the new site better than the old. But there are always little "glitches".

I have linked the new site to this blog but will have to go through ALL of the posts and change the links within those posts to link to the new site. UGH!!! I will get it done . . . but please be patient with me. If you are reading one of the older posts and come across a broken link, please let me know so I can fix it. I will eventually get them all updated but it will take some time. Thanks for understanding.
Posted by Unknown at 11:47 AM 1 comment:

Quilled Creations has come out with a new set of tools called Border Buddies. There are three different shapes: a circle, a square, and a triangle. When I learned to quill back in the 70's my "teachers" were Betty Christy and Doris Tracey. Their book Quilling Paper Art for Everyone is still one of my favorites. They called these empty shapes “collars” or “frames”. Jane Jenkins in refers to them as “ring coils”. Whatever you call them, it is  fairly simple concept; wrap your strip around whatever you are using for a template several times. Glue the end down and pinch it into whatever shape you want. If you want a heavier look, wrap the strip multiple times and of course less for a lighter look.  You can then quill inside the shapes or around the outside of the shape or both! The border buddies already have three shapes and a whole range of sizes for each shape so you don't have to go looking for pens, bottles etc. to wrap your strips around.  Below is a picture of the smallest and largest shape mad with the Border Buddies. I don't use ring coils too often, mostly for leaves and flower petals, but these tools can be used to make geometric shapes as well. Ring coils are well suited to two tone papers because they are so open that both colors can be seen.
Since the strip is wrapped around the shape multiple times edged papers show up really well. Of course the round ring coils/collars/frames can be shaped into teardrops or marquise shapes and the square makes a great diamond shape. Have fun with them quill inside them or around the outside of them or both! 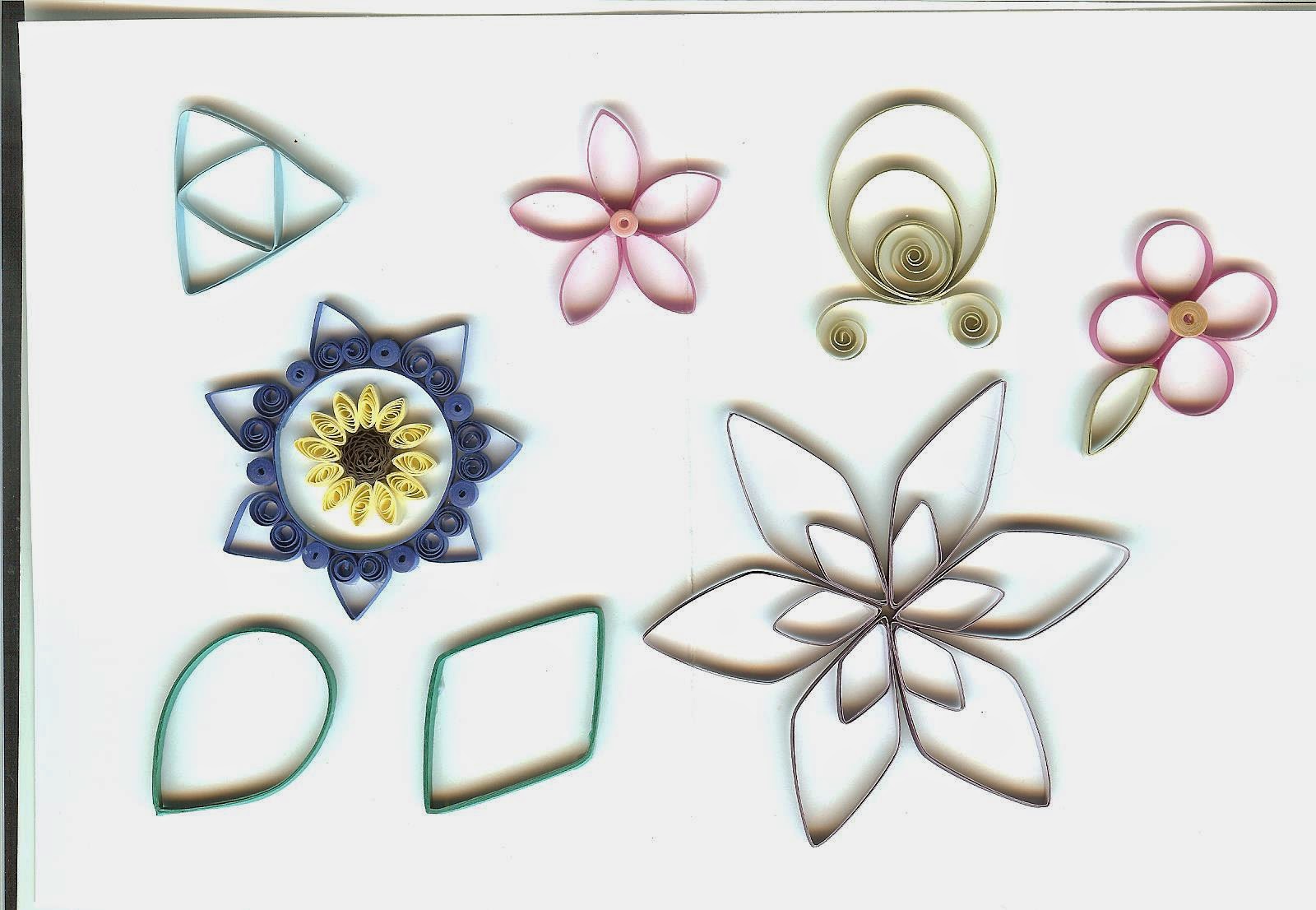 A walk down memory lane!

I had a very nice "phone visit" with Marlene Bartels this afternoon. Those of you who are more "seasoned" quillers may remember her company Quill It which she started in the 1970's and ran for 25 years. Marlene was good friends with Malinda Johnston (Lake City Crafts) and Betty Christy (Tree Toys). She called to let me know that Betty had recently passed away. It is especially sad for me since I've known and been inspired by these ladies for many years. They all attended the early conferences/meetings we had before we formed the North American Quilling Guild. We chatted and caught up on mutual friends/quillers for a while and then she told me that she had received a couple of very pretty quilled cards for her birthday and Christmas. These cards were made in Viet Nam! She pulled one out and gave me a web site which I thought I would share with you. There is a video which shows these cards being made and it looks like they are being marketed out of Framingham, MA. Go figure!  http://www.quillingcard.com/

Marlene and I talked about how much has changed since the 70's. She remembered how excited she was when the wider strips came out and how so many of the smaller quilling businesses from that era are gone now. She told me how excited she was when she had her first customer from overseas and about a collection of quilled figures she had from a customer who was in a maximum security prison. I told her about the quilling "dies", pearlized and metallic papers and how many companies are now selling quilling supplies. We talked about the internet and the role it plays in bringing artists together from around the world. I am so impressed when I see all of the fabulous quilling art that is being created all over the world.  When I think back to when I started quilling (1975) and wrote a newsletter which I sent out to 13 other American quillers it seems like a lifetime ago. I've met so many wonderful people over the years thanks to quilling. 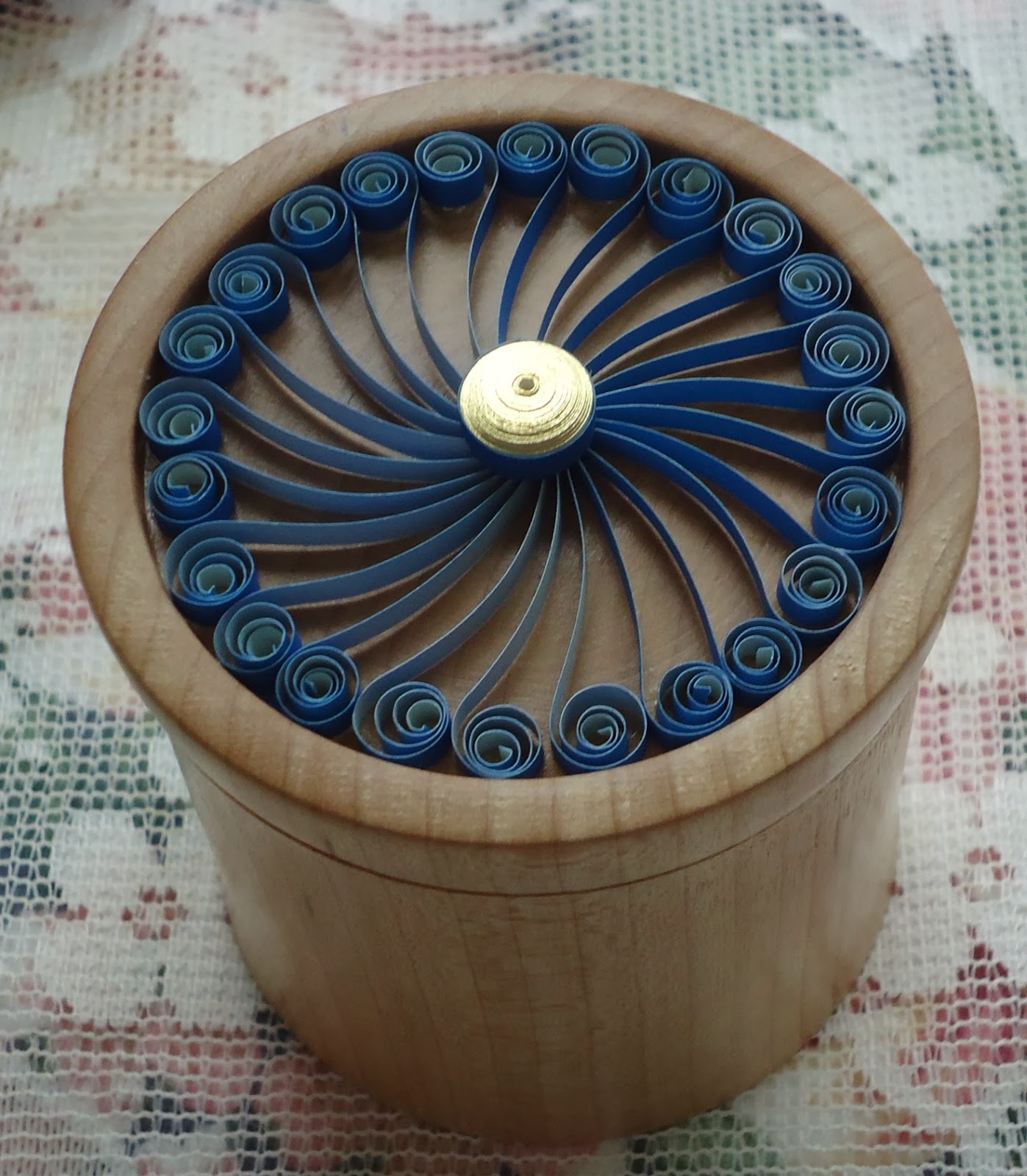 This is a box my son, Stephen, made for me with a recessed top. This is one of the first ones he made, so I decided to dress it up a little and send it back to him. I used a two toned paper for the quilling: it was a little tricky trying to get the spacing even. It was a different  style for me since I usually quilled flowers but I didn't want anything "frilly or fussy" I used 3" strips for the open coils and and placed them dry on the top to determine how many I needed. It was definitely trial and error since I manage to pop them right out of the recess several times. When I was finally ready to glue the coils down I just dipped the actual coil into a tiny bit of glue so it wouldn't show on the wood. I did have to do some trimming where the ends met in the center and then I covered the center with a tight roll of gilded ivory. I then wrapped the roll in the blue so it would match the rest of the quilling. The picture doesn't really show the effect of the two tone paper. It is really kind of neat!

You can see some of the other pieces he has made on his web site http://www.wolfwoodstudio.com/ . He does all kinds of neat things like goblets,shot glasses, even a baby rattle. He also restrung one of my wind chimes and replaced the clapper with beautiful wood rings. Another artist in the family!

Posted by Unknown at 1:06 PM No comments: 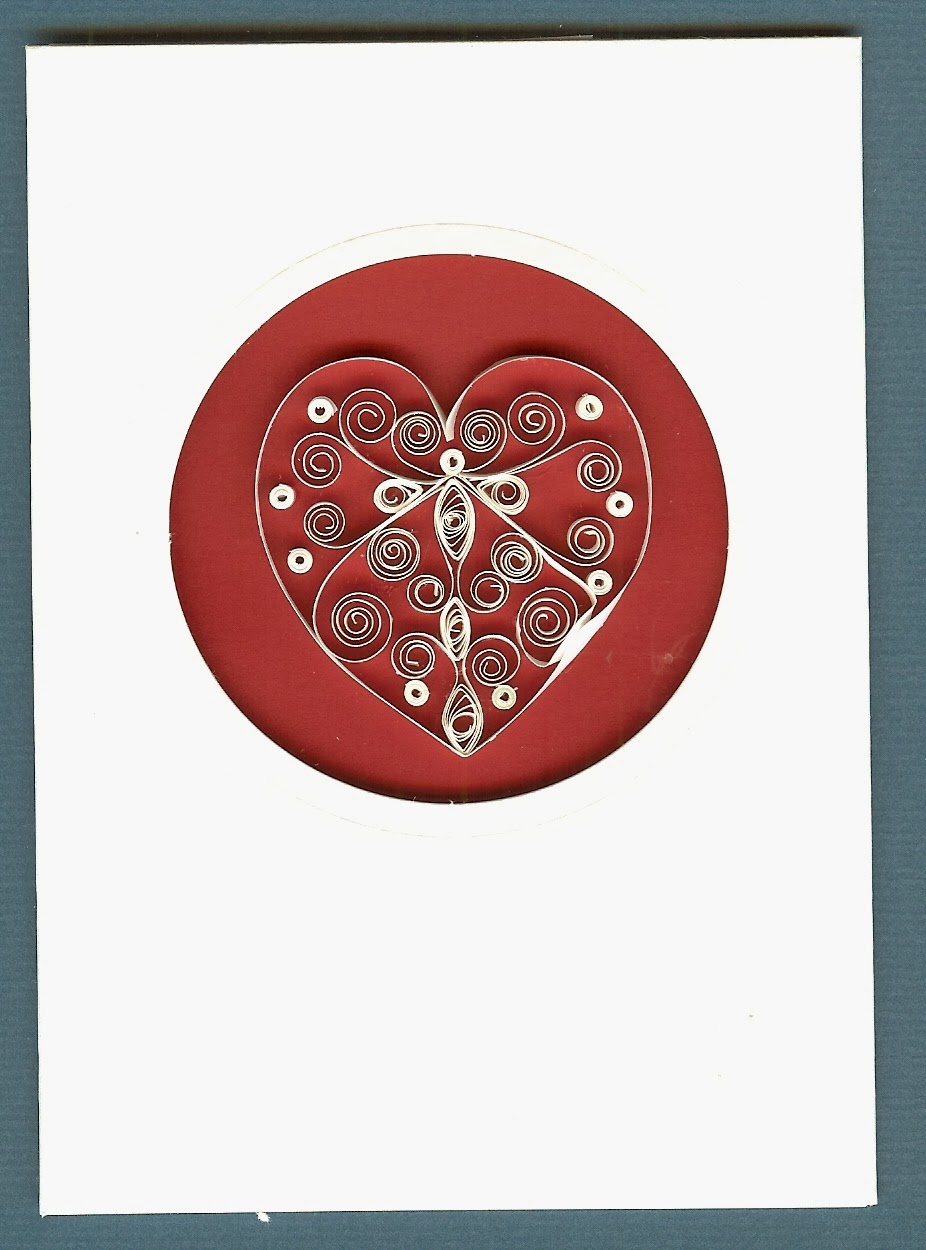 Here is a filigree heart for a Valentines Day or anniversary card or "just because I like hearts" card. This one is a little tricky because there are so many open scrolls so I would suggest assembling it right on whatever backing you plan to use. It’s much easier applying glue to those scrolls one at a time rather than trying to move and glue the whole design. I used a deep red back ground and didn’t put the dome on for the picture so you can see the scrolls clearly. After I finished the design I realized I should have scanned it in progress, so I recreated the steps to make the instructions a little clearer.

View 1-I started with a 7” strip which I folded in half, the fold is the bottom point of the heart. I gently curled the strip with my fingers and then glued the ends of the strip together to form the rounded part of the heart. Then I held it with my tweezers while I applied just a tiny bit of glue to the edges and placed it on the back ground. 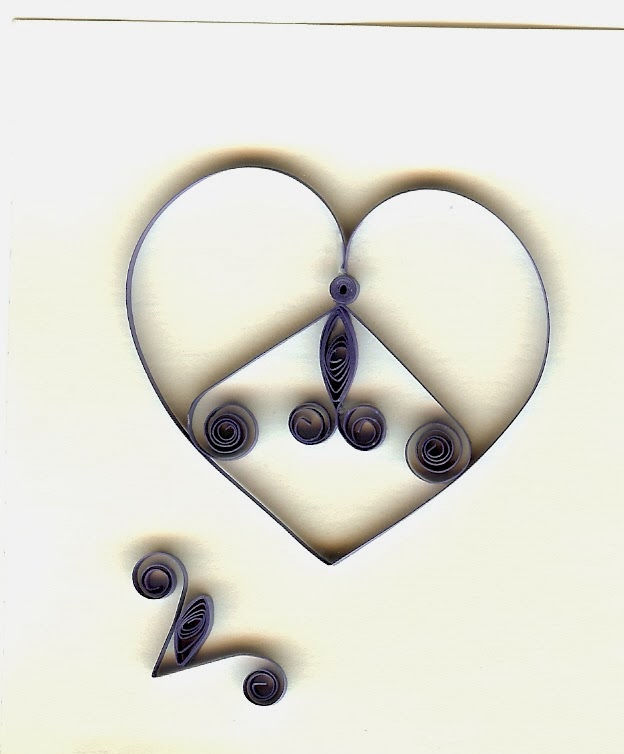 You will need nine 2” tight rolls which you can make ahead along with one 3” marquise, two 3” marquises, and two 2” teardrops. Glue the first tight roll at the “v” of the heart as shown.

Fold another 7” strip in half and curl the ends to make an open heart scroll. Glue the heart with the point at the tight roll and spread the arms to reach the sides of the original heart. (You may have to play with the heart a little to get it in place.)

Make a 4” open V-scroll and wrap it around the 4” marquise. Glue it into the point of the open heart as shown in view 1.

Make another 4” open V-scroll and wrap it around one of the 3” marquises and glue it into the bottom point of the heart, then glue the last 3” marquise in between the two open V’s as shown.

Make two uneven 4” open hearts as shown in View 2 and glue them in place. Then add two 2” open scrolls to each side as shown. Add the Last two 2" open scrolls, the 2" teardrops, and the tight circles as shown. You may need to make some adjustments to accommodate tighter or looser coils. Have fun with it!
Posted by Unknown at 3:37 PM 1 comment: 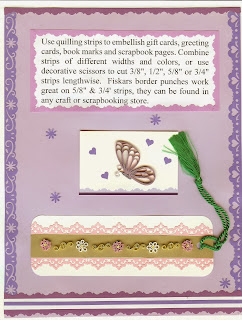 Quite a while back, I made this handout to illustrate different ways quilling strips could be used. We even carried Fiskars border punches for a while; although we are discontinuing them to make room for other inventory. I like using the punches or decorative edge scissors to create interesting borders for cards etc. I also use them to border the edges of my photograph albums/scrap books. I know some quillers like using the wider strips (especially the metallics and pearls) to make German stars. I have never quite gotten the hang of making them. I have had two different quillers sit down with me to teach me how to make them. I am fine until I go home and try it on my own; I get halfway through and then I get stuck! Oh well . . .

This week I found yet another use for my quilling strips. My 8 month old Shih Tzu puppy (Mandy) has discovered quilling! I just had to share her "work" I guess it is really more like "play". 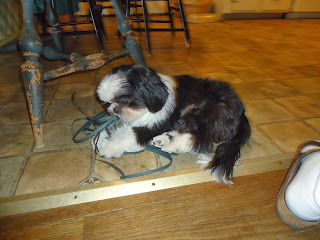 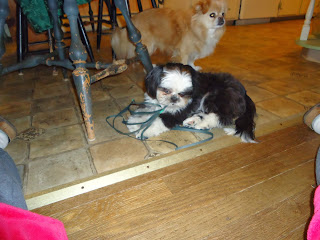 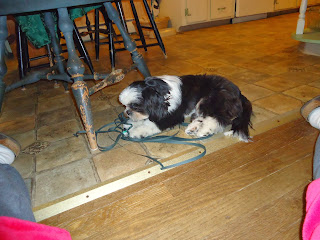