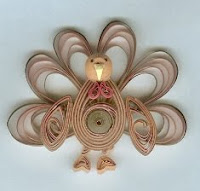 I hope your Thanksgiving is filled with family, friends, and of course, lots of good food. It is my favorite holiday; a day spent with those we love without all of the “hoopla” of some of the other holidays. This year I have been reflecting about the special people in my life. My children, who are my biggest fans; my husband, who willingly shares his home with “Whimsiquills”, (it’s not a very big house!); Debbie, without whom I couldn’t run the business and of course our friends and families. But I am also thinking about the quillers I have met over the years and how they have changed my life. Malinda Johnston, (former owner of Lake City Crafts) has been a kind of mentor over the years. She encouraged me to start selling supplies, published some of my work in her books, and still stays in touch even though she has retired and moved on. I am grateful for a special group of quillers (Mary Alice, Ev, Donna, Bobbye, Kay, Gerta, Rita, Rick, Jinny, and Malinda), who were, and still are, so dedicated to this beautiful art form that they formed the North American Quilling Guild so American quillers have a way to stay in touch and learn from each other. I am thankful for my friend Andy Papineau (Paplin Products) who has worked so closely with us here at Whimsiquills. He has worked with us to develop tools (like fringers and crimpers) that were truly scarce just a few short years ago, and he has brought in all of the colors I’ve asked for as well as specialty papers. He also prods me to keep working on new quilling kits, which I never would have done on my own. I am also grateful to countless numbers of quillers, many of whom I have never met, who have written to me over the years, sending pictures of their work as well as those who have let me feature them is this blog. I have a great deal to be thankful for; I get to work at something I love and I enjoy all of the quillers I work with. I wish you all a Happy Thanksgiving and a happy healthy holiday season.
Posted by Unknown at 5:34 AM 1 comment:

Quilling Can Be Therapeutic

Quilling can be therapeutic . . . thank goodness for that! Of all of the things I enjoy doing: walking, gardening, reading, playing the piano, and quilling . . . quilling is the one thing I can do even when I am exhausted and unable to focus. Just the simple task of rolling shapes to be used in making flowers or snowflakes, something very routine, seems to calm my mind. There are times when I just make teddy bears or roses or shapes for several hours at a time; it helps to still my mind while keeping my fingers busy. I mention this because the last month has been a very tough one for me, personally. I have not been able to find the time, or collect my thoughts enough to put together a post for this blog. I have just come back from Florida where I spent a week helping my sisters move my mother and her husband into an assisted living facility. At 86 & 83 years of age, both of them are in failing health; he has had multiple strokes and my Mom is very frail and is having serious memory issues. My family has been trying to convince them that they needed to be in a safe place, but naturally, the actual move was precipitated by a crisis. While all of this was going on, my 96 year old mother-in-law fell and broke her hip necessitating several trips to New Jersey. One of my sons was hospitalized with a kidney stone, and to top it all off my daughter’s house was totally flooded due to a plumbing problem. Her house has been totally gutted and she is living in temporary housing for the next several months. So what does all of this have to do with quilling? Well, I came back home to Connecticut last week, took a look around and just didn’t know where to start to “pick up where I left off”. (Thank goodness, Debbie was here most of the time . . . that is until everyone in her house got sick!) Since my brain seems to be non-functional at this time, I finally sat down and started quilling. I just started making marquises . . . I figured I could use them for daisy petals at some point in the future. While I was tranquilly rolling them, I started thinking about the upcoming holidays and decided I could use those marquises to make snowflakes; before long I was so engrossed in what I was doing that I forgot about how "frazzled" I was feeling. So while I was trying to clear the fog from my brain I played around and made a bunch of Christmas cards. Quilling is definitely better than Valium . . .

Directions for snowflake card: (in case you are interested)
I used the new Snow Bubbles punch on a white Paplin fold over greeting card. I then cut a 3’x4” rectangle from an accessory pack and used the border punch. I attached it to the front of the cart using a Dotto removable adhesive (so I could reposition it if necessary. I found the center of the punched rectangle by measuring diagonally across the rectangle. The snowflake was made from six 6” marquises which I glued into six 4” open V’s. I then made six 2” teardrops and assembled the snowflake right on the card. The tiny snowflakes in the corners were the “falls” from the punch. Quick and easy.

Directions for Christmas ornament:
I used the Antique Elegance Circle Border Punch for the green background, positioned it the red card with Dotto removable adhesive. Then I positioned a white circle die cut (2 ¼”) on the punched background. I marked the center of the die cut and put a green 3” tight roll in the center. I placed six 3” tight rolls around the center. I made six green 3’ teardrops which I alternated with six 3” marquises around the tight rolls. For the border around the die cut I used eighteen 3” marquises and eighteen green 3” tight rolls between the marquises.
Posted by Unknown at 11:55 AM 3 comments: