It has been such a long time since I posted here; not because I had nothing to say but because there was so little time to say it. I love the new web site www.Whimsiquills.com but it has taken so long to get everything done-on top of that I had to change computer systems-then go to a laptop so I wouldn’t spend so much time running up and down the stairs and on and on . . . 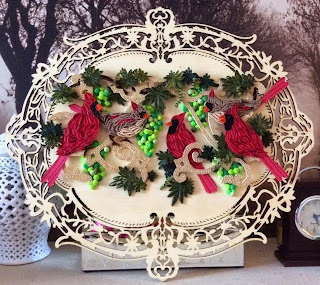 But what I have to share with you today is not about me, but about a new quilling friend I have met through Whimsiquills. Her name is Jan Howard and she lives in Canada; the only reason I actually got to “talk” to her was because she was having some difficulty with the web site. Well, as is often the case we became quilling friends and chat each time she places an order. We talk about quilling, how hard it is to find frames, and since she often hears them in the background we end up talking about my dogs. My three little guys and what is turning out to be my forever foster Shylo. She called one day to ask whether I sprayed my work and we had the “spray or not to spray”conversation. At any rate she told me she had done a piece with cardinals in it and I told her I watch them out the studio window and asked if she would send me a picture of her piece. It is just lovely! She gave me permission to share it with you all and said she was jealous because she didn’t get to watch cardinals she could only quill them.
Posted by Unknown at 3:03 PM 4 comments: