This post was a really easy one; it is about a quiller I have known for many years, Sherry Rodehaver. It’s easy because Sherry wrote it herself, and even though I have known her from the days long before the American quilling guild (NAQG) came into being, there were lots of things I didn’t know about Sherry. I didn’t know that she was interested in medicine as a teenager . . . when I read her piece, I wrote to her to tell her that I was also interested in medicine in high school. In fact I studied Latin thinking about pre-med in my future, and instead fell in love with languages! . . . So the fact that she was interested in medicine came as a surprise. What did I know about her? She is a terrific lady, always pleasant and gracious without a mean bone in her body. She has been a valuable asset to the North American Quilling Guild, and she is very talented. Her creativity is endless, as you will see by some of her work pictured here, but read on . . . let Sherry tell you a little more about herself.

I have always had a love of art and crafting and especially when paper was the primary medium. However my intended career path was one of medicine. I was headed toward medical school with the intention of becoming a veterinarian. I got side tracked. I married soon after graduating high school and began raising a family which eventually consisted of a husband and 4 children.

In 1970 I was co-owner of a craft supply store and attended various trade shows for the business. At one of these shows I met Barbara Maddox owner of “Quill Art” and purchased her line of quilling supplies and kits for the store. Following the instructions included with the supplies, I taught myself quilling, and made all the samples for the store. A short time later I sold my interest in the store and went back to doing local art shows; this time with a “new” product…Quilling.

In 1975 I was invited to exhibit at The Yankee Peddler Festival in Ohio. This was a “high end” art show with a Colonial theme and a strong emphasis on educating the public to the process of traditional American arts and crafts. I have just completed my 34th year participating in this now renowned show. 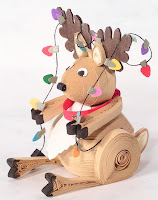 I worked in relative isolation during the first ten years or so of my paper quilling adventure. I neither knew anyone else who practiced this art form nor saw anyone else’s work. This actually allowed me to find and perfect my own style which was mainly 3 dimensional and free standing work in miniature. Although I occasionally do framed pieces they are almost always dimensional. Designing free standing miniature animals has always been my real passion and annually I design new animals and add them to the ever growing collection. Although I find inspiration everywhere I constantly receive requests from collectors of my work for specific subjects. These requests are acted upon and often result in the “new” or “latest” addition to the line. 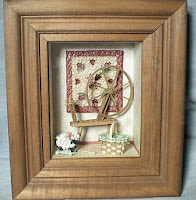 One of the most comical and embarrassing moments happened recently at the “Peddler” Festival. A potential buyer was standing in front of the booth carefully studying the display of miniature animals. She picked up an alligator apparently intending to purchase it. Suddenly she put it back on the display and exclaimed “oh, never mind, I wanted one with teeth” and hurriedly walked away. Stunned, we all looked at each other quizzically and then turned the display around to see what she was talking about. I generally work “assembly line style” and it seems that in my haste to complete the alligators I had forgotten to put “teeth” in between the jaws. A quick check of the remaining stock showed this to be true of the entire “batch”. Now when a buyer selects a miniature for purchase, most of use smile and silently ask ourselves……”would you like that one…with teeth, or without”…lol 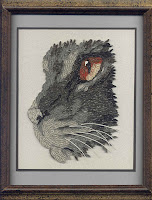 In several of my designs I use punched out shapes for certain parts of the design such as bird wings. In exploring the world of punches I discovered just how vast it was and how easy it is to make many small accent flowers that compliment the quilling florals nicely. In light of that I began selling punches for “Floral Punch Craft” and offer over 300 different varieties in my eBay store. 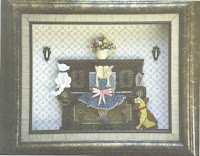 If Looks Could Quill said...

Thank you so much for sharing this post from Sherry. It is so neat to read about and see work from you veterans! I hope that someday my quilling art will be honed like it is for you wonderful ladies.

Thank you so much for letting me know about your quilling website......though I have just started quilling I am totally in love with it. I always wondered how to make fringed flowers, and what to do with thicker quilling strips...I found all that information and much more on your blog...thanks again :)

Sherry I just LOVE your work! Michelle said, "They (Noahs Ark) make a quarter look big" Your 3-D borders have given me wonderful inspiration over the years. Michelle was 9 months old when I found Yahoo Quillers on the internet, she's now 16. It is a wonderful jounrey we are making together!

Sherry, I love your 3D work! Is there any chance you sell a kit or instructions for the teacup kitty? It's amazing! Kay