This week I would like to introduce you to Sandra White, a quiller from New Hampshire. I’ve admired Sandy’s work for years. I used to sell some of my work through a shop in North Conway, New Hampshire. On my trips up there, (I LOVE the White Mountains and everything about New Hampshire . . . It has always been a secret dream of mine to live in a cabin in the White Mountains), I enjoyed poking around in the shops in and just enjoying being up there. I first saw Sandy’s work in a shop run by the League of NH Craftsmen. I almost missed it. They were pictures of birds and wild flowers (did I tell you I love wild flowers and have bird feeders right outside the Whimsiquills window?) The interesting thing about these pictures was the outline of the birds/flowers was cut out and the actual quilling was behind the cut out. Recently, I came across Sandy’s blog http://www.quillingbysandrawhite.blogspot.com/ and read about how she came up with this idea “by accident”. I contacted her and she has given me permission to share her story.

“I started quilling in 1973. I went to a craft shop and came home with quilling paper to frame and embellish my girlfriend’s wedding invitation. I made all kinds of tiny little flowers. When I went back to the craft shop , I showed the girl and she said “you didn’t even have a quilling tool!” She showed me the tool with the slot, I took it home and have not stopped quilling. It was so easy with the tool that I haven’t stopped.”

“In the mid 80’s …………that sounds so long ago………my mother-in-law Dona was making cut and pierced lampshades to sell in the League of NH Craftsmen shops with my father –in-law Dick’s turned wooden lamps…..very beautiful, I even have a couple.

We had thought that perhaps a little quilling on the shades might be pretty. So I made up some flowers and we tried to place them on the shade. We had envisioned that the flowers would show nicely when the lamp was turned on. But it did not. Instead, the flowers slipped behind a cut-out in the shade, and it happened to be that of a loon. And the accident was born. Quilling my way. When the lamp was tuned on, all you could see was a blob of something. But when it was off, the quilling showed very well behind the opening. That’s where the idea of quilling behind a cut-out was born. A happy Accident. So much for quilled lampshades…………I did make flowers for a few lampshades with Dona completing them. And I did sell a couple……………but my interest was in the birds and ducks…………..and on to wildflowers and other wildlife. Quilling, My Way, developed from that little accident……………I do have a lampshade with quilled flowers on it as shown below. I am unable, perhaps unwilling is a little more honest, to make any more, as I do not have any interest in making the shade itself. Too tedious ………like quilling isn’t tedious.” 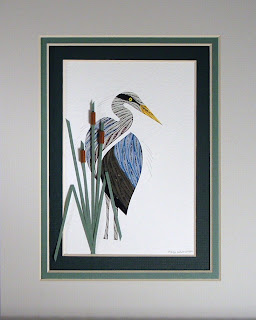 If you would like to see more of Sandra’s work check out her web site http://www.quillingbysandrawhite.com/

What a lovely story. Thanks for sharing it!

Thanks Pat for the great story about my accident. I have seen your work for years also, in North Conway. All those tiny little flowers...you must have patience!!! Sandy White

Thanks Pat for the great story about my accident. I have seen your work for years also, in North Conway. All those tiny little flowers...you must have patience!!! Sandy White