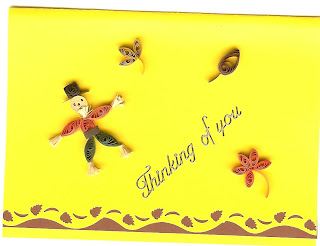 Here is another fall “Thinking of You” card. While I was working on it, it occurred to me that the scarecrow or the leaves would look cute on place cards for Thanksgiving dinner. We have about 25 people for dinner on Thanksgiving. With that many people in a very small house it sometimes seems like “musical chairs”, so I won’t bother with place cards. I did, however, think of another use for the little cards. Because I, along with my daughter and sister, are “gluten free” and “dairy free”, I have gotten in the habit of labeling the different dishes, especially things like breads and desserts. I think the table will look more festive with these cute little cards (N01331), decorated with quilling.

Here are directions if you would like to make some of your own.

Thinking of You card: I used the leaf punch N244831 starting at the center of a yellow card and then out to each side, I glued a 3/8” strip of brown behind the punched border. The little scarecrow’s head was a 12” tight coil. His legs and arms were 6” marquises, his chest a 6” teardrop pointing up towards his head. I fringed a ¼” straw colored strip and cut and rolled 1” lengths for the “straw” at his hands, feet and neck. (I carefully trimmed a little off the back of the fringed strips before I rolled them) I used a 4” strip to make a square for his hat with a small strip for the brim. I also glued a small dark strip for his belt. I used a marker to make his eyes and mouth. 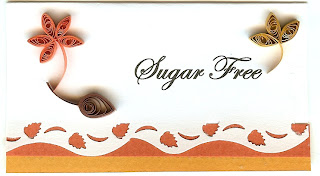 Leaves: I used a 6” brown strip and made an eccentric teardrop for the single leaf. For the gold and yellow leaves I used 3” marquises, with small curved strips for stems. 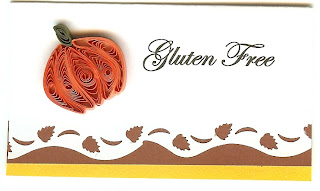 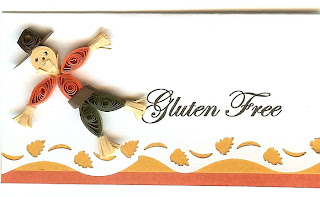 I used the leaf punch for the border on the small cards and then glued two 3/8’ strips together so a narrow strip of color shows at the bottom of the border and the wide strip shows through the leaf pattern. I always use the removable Dotto adhesive so I can “play” with the strips until I get them where I want them. Since I didn’t have “gluten free” stickers, I used removable tape to fasten the small cards to a larger piece of card stock and fed them through my laser printer. The computer font is so much nicer than my handwriting!
Posted by Unknown at 7:25 AM

there really cute, and what a good idea for there use!!!!
Paula

Very cute cards and lovely idea of using them! Love the scarecrow!

Hi Pat!
I sent Whimsiquills an email enquiry on 28 Oct/2 Nov but haven't heard from the team? Might there be something wrong with the email server? I'll try to send the email again today and hope to hear from them soon. Thanks!
Patsy

Decent cards! i think you have used Plastic Cards right there isn't so?